Previously in this series on quantum error correction, we looked at the toric code. This is a fairly simple quantum code for us to understand, but not so simple to actually build. Making a bunch of qubits and then using them as the icing on a doughnut would not be the easiest of things for experimentalists to do. They would be much happier if everything was flat. Fortunately, by flattening out the toric code we can get the so-called planar code, which is just as good (or half as good, depending on how you measure goodness).

But this post is not going to be about the planar code. First we will look at a nice story that can be told about these codes, that can help us understand them without needing to pore over all the little details. This is the story of anyons.

Rule-breakers in the toric code

The toric code is a bunch of qubits sitting on a grid. For each big white square in that grid, there is a rule. When errors happen, rules get broken. These traces left by the errors are what we use to find and correct them.

How exactly do errors cause broken rules? In the picture below, an error has happened on a single qubit: the one shown in red. This has caused two rules to be broken: those for the big white squares either side. 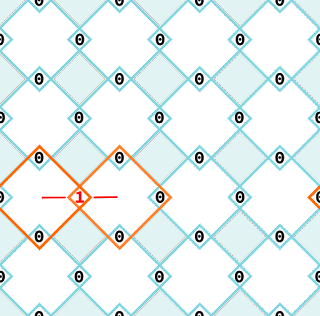 This happens wherever we get a single, isolated error. It always causes the two neighbouring rules to be broken.

What happens in more complicated examples, where some rules are already broken?

The rules state that the numbers around each big white square should add up to an even number. Every error flips the two neighbouring squares, from odd to even or even to odd. This means it flips the squares from being rule-obeyers to rule-breakers, or vice-versa.

So suppose another error happens around one of the rule-breaking squares from before. 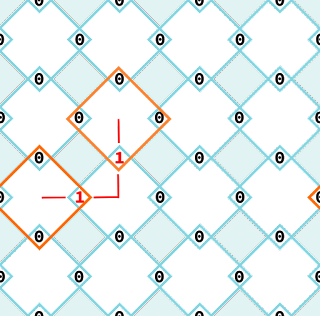 The previously rule-breaking square now obeys the rules again. But another square is made to break the rules. So the new error has effectively moved the broken rule, from one place to a neighbouring place.

How about an error that happens between two rule-breakers? If an error flipped the pink 0 below to a 1, both of the rule-breaking squares will be be turned back into law-abiding citizens. 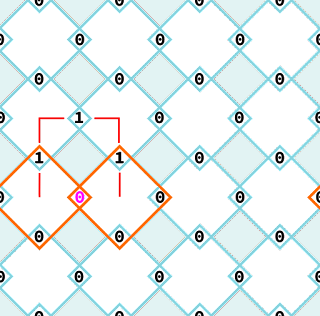 This is the exact opposite of when errors create a pair of rule-breakers. Here it effectively moves them together, causing them to cancel each other out.

Another important elementary particle is the photon. This is a particle of light. Unlike electrons and quarks, photons have no mass and no electric charge. They just zip around at the speed of light, hardly interacting with anything unless they bash into it. Then whatever they hit absorbs all their energy, and there's no more photon. This makes photons more like little blobs of energy than a 'proper' particle, like electrons and quarks are¹. You can't make chips out of photons!

The electron has a brother. An evil twin. The positron. If an electron and positron ever get too close too each other, they annihilate. All their mass and energy disappear in a burst of light.

The opposite can happen too. If a couple of pretty energetic photons meet, that energy can turn into an electron and a positron. This all might seem a bit like getting something from nothing. But because those two somethings add up to nothing, the universe seems to think it's okay.

So what have we seen so far? Broken rules in the toric code are created in pairs and can be moved around. If two are moved together, they cancel each other out and disappear.

Particles are also created in pairs, and can be moved around. If a particle and antiparticle are moved together, they cancel each other out and disappear.

So broken rules in a toric code behave a lot like particles. The antiparticle of a broken rule is simply another broken rule.

Of course, they are not 'real' particles in the same way that electrons (or even photons) are. They are examples something we call quasiparticles. They are just things that we can understand by telling the story they they are particles. They won't pop out of the toric code and start interacting with real-life electrons any more than Harry Potter will jump out of a book. But within their own little universe of the toric code, it makes perfect sense to think of them as particles.

Bosons, fermions, or something else?

All particles in our universe are either bosons or fermions. Electrons, positrons and quarks are fermions. Photons are bosons, as are Higgs bosons as I'm sure you won't be surprised to learn.

What about our rule-breakers? A little analysis shows them to be bosons, the most boring type of particle². But we should remember that the blue squares have rules too. 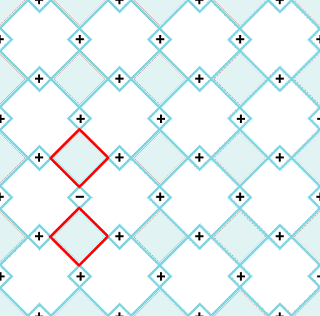 These are another kind of particle that live in the toric code. If we look at how the blue square rule-breakers play with the white square rule-breakers, we will find some strange things happening. Things that particles in our own universe never do. They aren't bosons or fermions. They are anyons!

But what is an anyon? That'll have to wait until next time.

1. I am making the distinction between electrons and photons here because it suits the story that I want to tell. For other stories, it is more suitable to think of them as equally 'proper'. So please forgive my racism against the gauge bosons.

2. Apologies again for my particle racism. I am in fact very appreciative of all that bosons do to mediate interactions in our universe.